I know it is wet and the sun is not sunny.

“I know it is wet and the sun is not sunny. But we can have lot's of good fun that is funny!” says the Cat in the Hat. Gardeners just say thank you Lord for all this good soaking rain. I have an update on the Sunny Border, and then i'm off to celebrate my birthday with my family - look out Outback - country come to town! 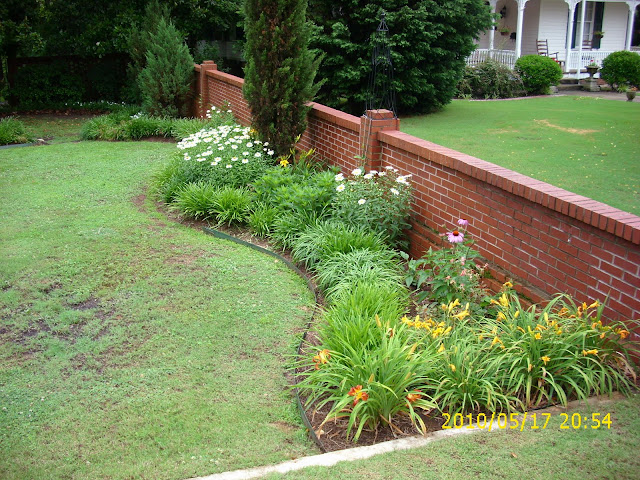 You can see that everything has come back and filled in nicely. It's been hot here and many things are pumped and doing good. This is an unnamed daylily from a old gentleman breder here in town. He sells his culled out trials once a year in the Spring. 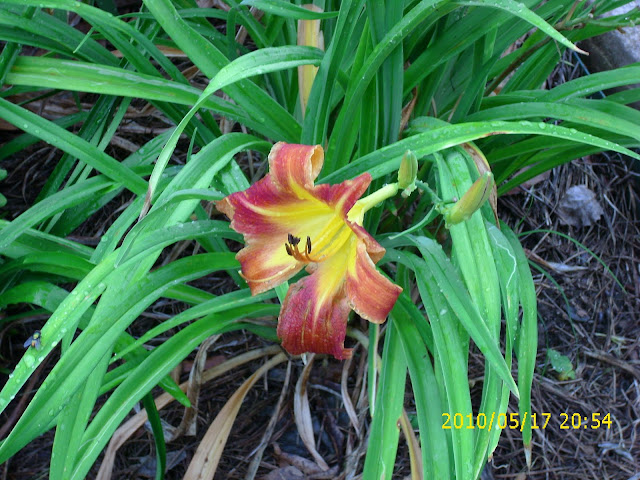 Echinaciea have come back nicely and are really filling in. A new sea holly is tucked in behind it and will make a nice contrast to the pinks and yellows in this area. 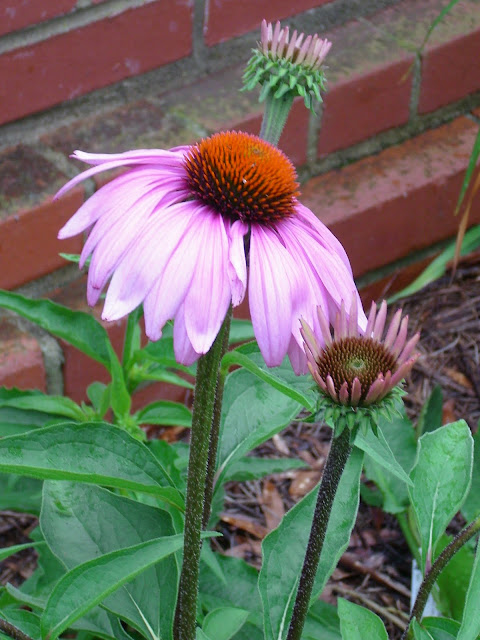 The mandilla vines are loving the heat and now all the rain we have had here in the Upstate of SC. They should be grabbing their frameworks by next week or so. 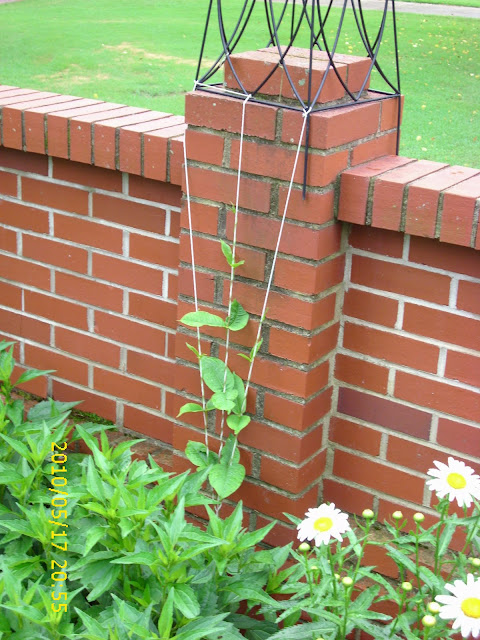 The center of the bed features an Italian Cyprus Tree, Shasta Daisies, and yellow daylilies. 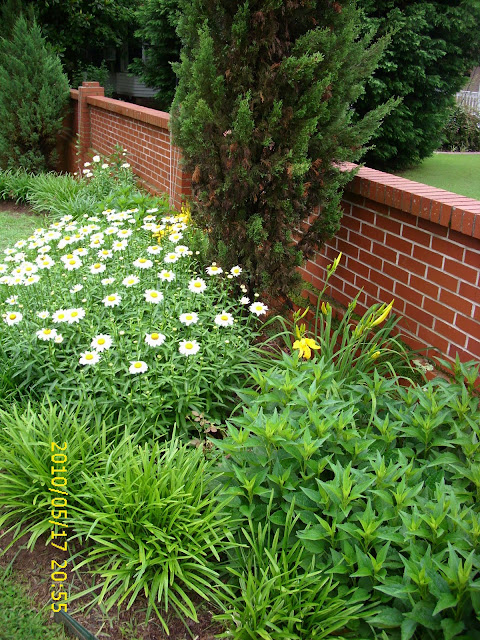 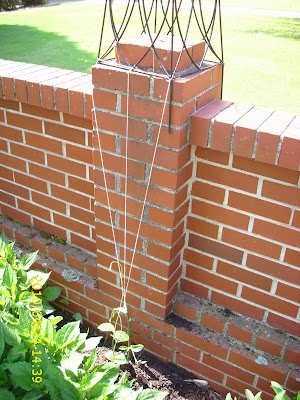 My saved Mandevilla plants have successfully made in through the Winter, and have been placed back into the front Sunny Border. They grow about as fast as kudzu so - they are doin' fine! I'm so proud. 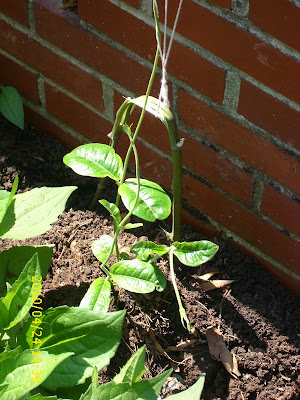 Here's a close up shot showing how healthy they are -
i think the black cow will make them happy too. 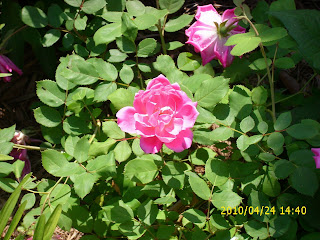 The knockout Rose i got for my birthday last year is doing good - this one is a lighter pink that i got from the clearance rack at the end of Summer last year. I love the soft pink. I'll be curious to see how they like the hot sun this summer. 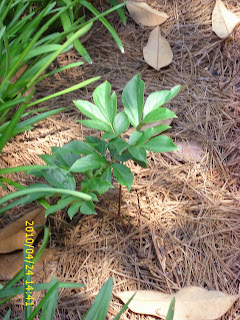 Here's one of the new peonies we are trying out. I've never attempted to grow peonies - they seem so hard according to what conditions need to be prepared. I know one thing - they are loving the bright sun in the front bed. I hope they like hot and dry July. 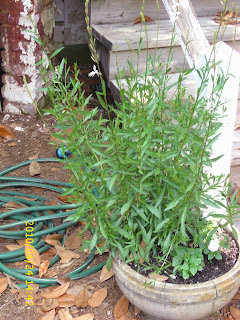 This planter is at the bottom of the steps leading into the new White Garden in the Circle Yard.
This guara plant didn't do that great last year, this year it is singing loudly. Below is close up. 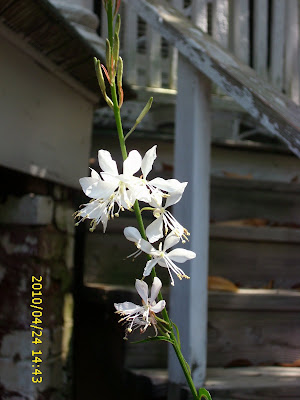 Finally our newest addition, Hosta June. The bright green looks good in the White Garden, it really shines out from the shadows. I bought it downtown at our Spring Festival - i love to have memories attached to plants. 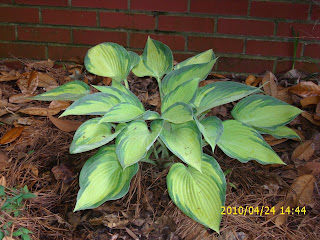 I had such good success last year Air Layering my favorite camelia Pink Perfection - i decided to try it again. I gathered the following supplies: sharp bladed knife, soaked spagnum moss, scissors, string, plastic wrap,and aluminum foil. I soaked the spagnum moss for several hours before i started working so it would be good and wet. 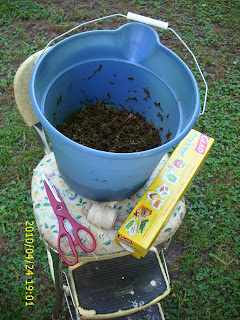 To begin, I chose branches of the camelia that were about the thickness of a wooden pencil that would yield a finished cutting about foot or a foot and half tall. 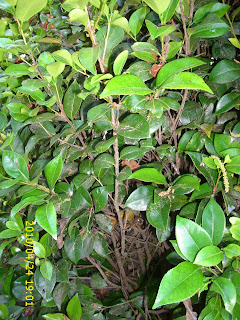 I stripped the lower leaves that were in the way. Take the sharp knife and make two cuts around the branch, cutting just the top layer of bark not cutting into the woody under layer. 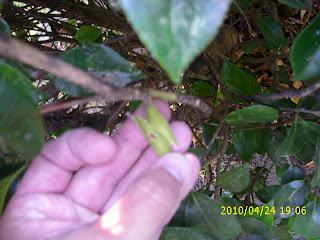 Make one about inch below the other, then cut a straight cut from the top cut to the bottom cut. Take the knife and carefully open and peel the bark out of the cut area. 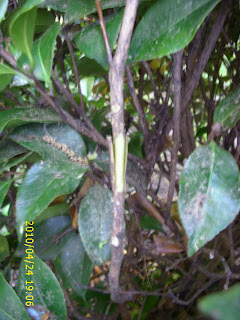 Next take a piece of plastic wrap - i used Press-and-Seal - place small fist sized clump of soaked spagnum moss on the plastic wrap and surround the cut area of the branch. 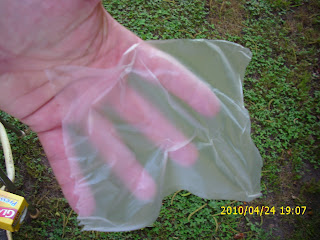 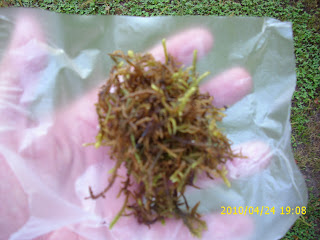 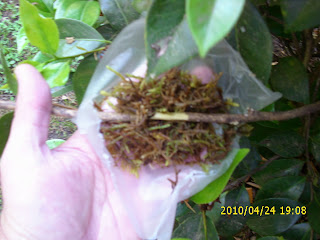 Carefully wrap the moss in the plastic, because i used Press-and Seal it sticks to itself so this part becomes very easy. 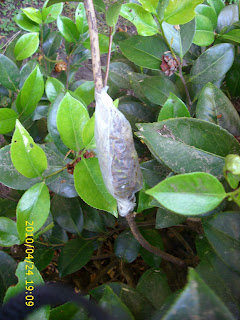 Once the soaked moss is wrapped tightly in its plastic wrap case i used string to tie the top and bottom of the package to help keep the moisture inside through next few months. 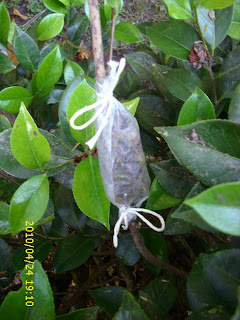 Notice that i tied bows and did not tie knots. Last year i tied knots. When i got ready to take the wrappings off the cuttings - i could hardly get the knots out because the branch kept growing and tightened up through out the summer. My suggestion to you is no knots! 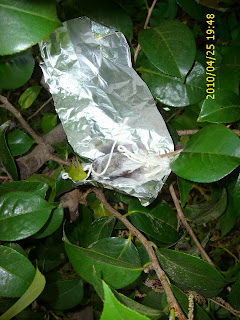 Finally i took a piece of aluminum foil and wrapped the whole package to keep it safe from birds searching for nesting materials and to darken the area where the roots will be forming in the spagnum moss. 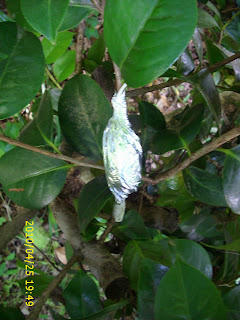 I am done for now - there is nothing that i can do until around Labor Day. Last year i checked one "package" every month to see how it was doing, to see if it was staying moist. To my surprise it did stay moist through the whole Summer. There was no activity until the weather started to cool off - here in zone 7b that's around late August or September. Once i saw roots, i clipped the branch below the new grown roots, and planted them into recycled black pots. This was one of the most successful projects i have tried unlike rooting clippings, or rooting in water.
This is definitely the way to go! 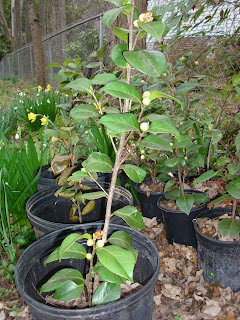 Of the 12 that I started last year one died on the bush, and one died after i planted them up. That's a good success rate compared to zero plants that survived as clippings. I hope this inspires some of you to try this easy method, i love it! As soon as school lets out in 16 days i'll be trying crepe myrtles.
Posted by David - Pinewood Cottage at 2:58 PM 3 comments: 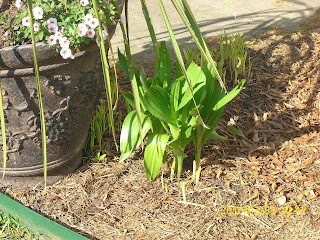 Thanks to Heidi who knew this plant as Colchicum. Common name seems to be Sons-before-the Fathers. In the Spring this lush green foliage comes up and gives the promise of a bulb but nothing ever comes of it. I have watched this happen several years maybe a decade. I even remember commenting to my wife several different times in the fall "look at those crazy crocus blooming at the wrong time of the year'. I did a little research this plant seems to be more adapted to cold climates - maybe up North like Maine. We are not a cold climate area. Our house is the Lythgoe - Barnwell House. Mrs. Barnwell lived here from about 1901 - 1946. I think maybe this is a plant she brought here from her home place in Maine. It isn't anywhere else on the property. Thanks Heidi! What fun - happy gardening guys!
Posted by David - Pinewood Cottage at 7:07 PM No comments: 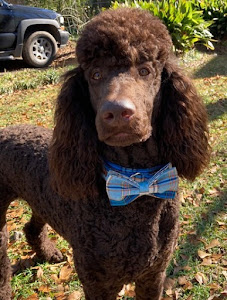 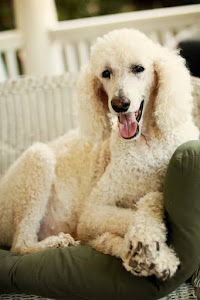